Recent developments at COP26 have highlighted the importance of national, plurilateral and industry action to shipping’s decarbonisation. The International Maritime Organisation (IMO), however, remains a crucial body developing decarbonisation measures, and the recent meeting of its Marine Environmental Protection Committee (MEPC77) was seen by many as a key test for the IMO’s ability match the momentum developing in these other arenas.

The Transition Strategy identifies a number of key levers needed to drive the initial emergence phase of the transition, and others that will be essential for the subsequent diffusion phase, when the use of zero-emission fuels will have to be rapidly scaled-up. The report judged policy from the IMO to be particularly important to this diffusion phase, though it also identified a number of ways in which the Organization could potentially support emergence. The following table presents the key levers for these two phases and an overview of how they were addressed at MEPC77. 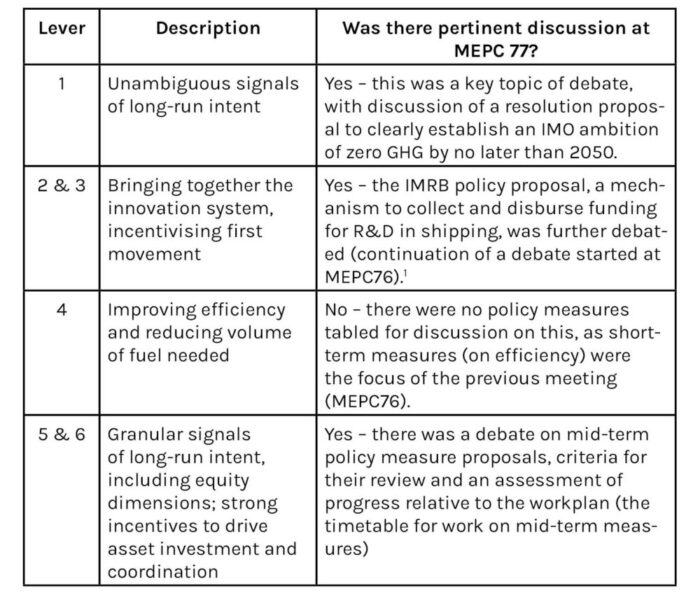 While the MEPC77 meeting did not debate on all the potential levers of change that the IMO could enable[2], it did spend significant time on a number of key issues, with the following outcomes:

An expanded analysis, reviewing proceedings, outcomes, and some important steps to come has been compiled by UMAS. You can download that analysis here.

FacebookTwitterRedditLinkedInWhatsAppTumblrPinterestVkEmail
Page load link
We use cookies to ensure that we give you the best experience on our website. If you continue to use this site we will assume that you are happy with it. OK
Go to Top